Once upon a time I was a 'Ringer" LOLOL I have been a 'Ringer' for decades and continue to be one.  One of the coolest things I have been a part of as a Ringer was at the Oscar party for Return of The King.  The website TheOneRing.net has long been home to everything Tolkien.  Every year one of the Lord of the Rings or Hobbit movies are nominated for an Academy Award TheOneRing puts on an Oscar party.  I have attended several of these parties.

The tickets for the party for Return of the King, or the Return of the One Party, went on sale online and were sold out only minutes later.  I was one of the lucky ones who was able to get a ticket.  I was headed back to Hollywood.  These parties have been costume or black tie events.  I packed my finery, got my hair done and hit LA.

The party is filled with other Ringers and people who wish they were Ringers.  We partied, played games and watched the Oscars mount up as the evening went on.  Some time later after all of the awards had been handed out, the V.I.P.'s started to arrive.  These were the folks that had something to do with the production of the movie.  From Costume Designers to Actors, there were dozens of people who came to party with those who loved their work.
The artisans came to thank us for loving what they have made, and we came to thank them for making it. 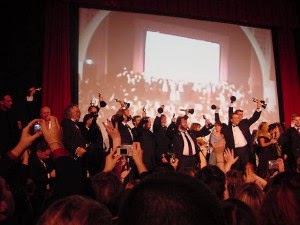 When we first arrived at the party we were all checked for ID and given an a bracelet letting the staff know we belonged there.  Even if you were cosplaying Galadriel and doing it well, you were required specific credentials.  WOO HOO for security.  After the awards were over and we were waiting for the V.I.P.'s to arrive I went out in the hall and watched them arrive through a side door.  What I saw was kind of curious.  I saw a woman who was dressed to the nines try to get in at the V.I.P. door and security would not let her in...she was not on the list.  She looked a lot like Oprah Winfrey.  As the night went on I forgot about the incident as I partied.

Fast forward to the next day in one of the zillion airports I was at trying to get home.  I was reading all of the papers I could get my hands on and the party was mentioned in several.  Many of them stated that The Return of the One Party was the place to be after the Oscars.  HEE HEE I was there......  Then on one of the TVs was Oprah on her show talking about Oscar night and all of the parties.  She talked about this party that she could not get into because she did not have a ticket.....heeeeee heeeee I did see her, I thought it was someone that looked like her.  LOLOL I got into a party that would not let Oprah into.  I thought that was CRAZY!

This story is an assignment for The League.  Our theme was Cool Story, Bro.  Check out other stories here:

Email ThisBlogThis!Share to TwitterShare to FacebookShare to Pinterest
Labels: Cool and Collected, Cool Story Bro, League of Extraordinary Bloggers, Oscar Party, Return of the king, Return of the One Party, TheOneRing.net