Hello and welcome to a new summer of Big Brother!!!!!!! 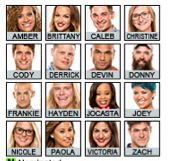 Tonight the first eight house guests entered the home.  They were Amber, Cody, Devin, Donny, Frankie, Joey, Nicole and Paola.  Right off the bat the group decided that they were going to be an alliance of eight so when the new folks come in they are already on the outs.  Devin approached Donny and now they have an alliance.  Paola saw Frankie and Cody playing chess and took that to mean they are in an alliance.  She ran to the girls and created her idea of elQuatro alliance of four girls.  HAHAHAH... I already see this as doomed.  Paola has the hots for Cody and Devin thought Paola looked good.  Meanwhile Amber is all into Devin but sees him checking out Paola.  This is making for a jealous girl which means doom for this girl alliance.
Next up is the HOH comp.  Julie tells the house guests about the comp and that this season is different and so is the HOH.  Off they go to do the comp.  The comp is called "Go Fly a Kite".  Everyone is on a spinning log and holding a rope that is attached to a kite which is hovering over a sand castle.  Last one still on the log is the new HOH.  First off was Paola then Joey, Nicole, Donny, Devin, and Caleb.  Amber and Frankie were the final two with Amber stating she threw it to Frankie since she was not sure how the new HOH would work.
Shortly after the HOH comp completed Julie came on and told the house guests that there would now be two Heads of Household.  Frankie began to freak and end of the houseguests for now.  Julie tells us about America's Team.  The viewers get to vote for a secret 3 man alliance and they will have to work together throughout the season.  We will see how this goes and how long it lasts.
Tomorrow the remaining eight house guests will enter and we can assume the next HOH comp also.  Catch you tomorrow.
Posted by Anoria at 8:48 PM