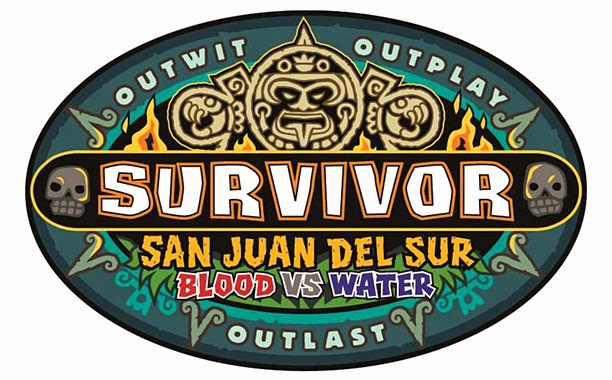 It is time for another season of Survivor.  This is another season of Blood vs Water.  Loved ones are on opposing tribes and will have to work together and yet work against each other.  This battle came right at the start of the episode where Jeremy volunteered to be the first to do a challenge and he the person he had to go against was his wife, Val.  Val is a police office in Boston and her husband is a firefighter in Cambridge.  This firefigher/police rivalry is already rampant in their relationship and he is trying to be a protector-provider but she is determined to be independent.  He wins the challenge and she is sent to exile island.    Jeremy also has to choose one of his own tribe to go with her.  He chooses the oldest man, Keith to join Val thinking he will take care of her.  LOL  She gets a clue to the idol back at camp.  Good for her.

Back at camp Jeremy decides to take the Russel Hantz approach with gathering a bunch of women to him.  Not necessarily a good or bad thing but it has become typical for the egotist to do this.  On the other tribe you have John Rocker a former pitcher for the Atlanta Braves.  He is trying to keep his history a secret but he is instantly recognized by the father/son duo of Keith and Wes.  With Keith on exile, Wes instantly calls him out.  He does this in private and I can not disagree with John when he thinks it might be best for him to get rid of Wes sooner than later.
Immunity time and the blue tribe of Jeremy wins the immunity.  Woo hoo for them. Keith is instantly on the outs since he was on exile for the first three days.  He is trying to fit in and Jeremy takes him aside and tells Keith that he owes him for taking care of Val.  What a jackass.  Val can obviously take care of herself.....DOI she is a cop.  Moron.  It seems like Keith is also a little apprehensive of Jeremy.  Good for him.

On the losing orange tribe, the fucking dumb girls start a all girl alliance and instantly count Josh in their alliance.  DURR, just because he is gay does not mean he is feminine or will be part of your click.  Dumb asses.  Lordy I hate the female pack mentality.  Thank goodness he calls them out in the diary cam and does not like it either.  Usually I am all about women winning, but they have already decided they are the young cute group and anyone that is older than them is too old.  YUCK!  I am NOT rooting for any of those females.  The other tribe hells to the yeah.  It is possible that Val, being three days behind is not really part of this, but more trying to fit in and then she is ok.

Tribal council comes and Nadiya, one of the twin sisters who were on the Amazing Race twice comes out of the gate and calls Josh a girl and how they-the girls(and Josh) have to go with the strong competitors.  She has made it obvious that she wants to get rid of Dale, the oldest tribe member who started fire for them with his glasses.  Probably due to editing she talks for half of tribal.  Sheesh.  Anyone who talks that much at tribal is a moron.  The vote comes back split, and in the end Nadiya is voted out.