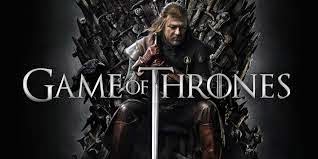 If you have not seen the end of season 4 or read the book A Feast For Crows, you might not want to read on.

I know, I am late to this party.  Many, many, years ago I read Game of Thrones.  I was so upset  by the beheading of Ned Stark that I barely finished the book and did not continue on in the series.  I did go on to read wikipedia and see if Joffrey Baretheon got what he deserved or not.  At that time, the Red Wedding had not yet been written and Joffrey was still on the throne.  I was so pissed off that there was no resolution or retribution to the murder of such an honorable man.  I decided I would never finish.

Many years have passed and the show was now on HBO and the buzz is everywhere.  My brother read all of the books and kept trying to get me to read them and watch the show.  Finally, after years of silent protest and solidarity for the life of Ned Stark, I decided to watch.  I think my brother almost peed his pants when I suggested we watch it.

The creators of this series have done an amazing job.  From the costumes to the special effects, the cast to the screenplay.  EVERYTHING has been done with such a deft hand, I am surprised.  I have now watched the series more than once and last Sunday was the season five premiere.  This is he first time I will be watching week-to week.  This is also the first season of the show that will be ahead of the books.  I am a bit nervous for what is to come.

I heard that the first four episodes were leaked.  WTG HBO.  I hope that I miss all of the spoilers that are inevitably coming out in the next few weeks.  I have also decided to avoid my brother as he has of course downloaded and watched all of the leaked episodes.    This episode was a bit slower than most.  I think it was intentionally that way to get you back in the swing of things and remember who was where in their stories. 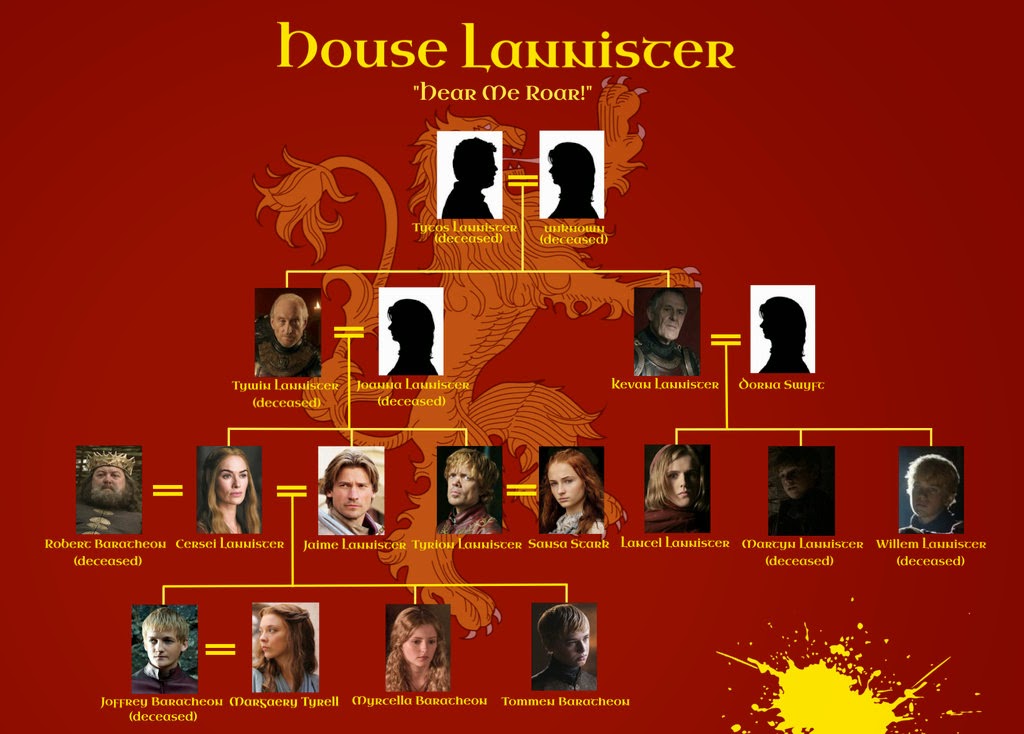 Tyrion.
By FAR my favorite Lannister and my favorite male character.  His story begins with a view from a box.  He has left King's Landing in a crate, smuggled away by Vyres.  They are both now in the house of Illyrio Mopatis.  We know of him because he housed the exiled Daenerys and her brother Viserys Targaryan at the beginning of their story.  Master Illyrio also gave Daenerys the dragon eggs as a wedding gift when she married Khal Drogo.  Tyrion is in a funk since shooting his father on the privy.  (HEE HEE I never thought that word would come up here).  He and Varys continue to discuss (not terribly pleasantly as Tyrion is covered in poo from his crate) their escape and future.  Varys will forever be a patriot of the realm and not whomever is in power.  He is trying to encourage Tyion to take up with Daenerys and her dragons.  Tyrion is by this point drunk and not really caring what happens to Westeros.

Cearsei.
My least favorite person in like forever...wait...only since Joffrey died I guess.  Her season begins with a flashback when she was a child.  She snuck off to go see a witch and have the witch tell her the future.  The witch did indeed tell her that future, and you can see how some of Cersei's decisions come from that place.  Her knowledge she will have three children and not from the king.  The king will have 20 but not from her.  We come back to present time and they are preparing the funeral for her father Tywin.  She is beyond rude to Jamie-her brother whom she has born his 3 children (and is hot).  She blames Jamie for taking up with their monster brother (Tyrion) and then killing their father Tywin on the loo. Jamie helped his brother escape but then Tyrion took the crossbow to their father unbeknownst to Jamie.  That was last season.  This season is the funeral for Tywin and Cersei is bitchier than ever.  Her betrothed, Loras Tyrell, tried to provide comforting words and all she did was blow him off.  Bitch.  He is the Knight of Flowers and brother to her soon to be daughter-in-law the BEAUTIFUL Margery.  Granted he is gay and not any happier about their engagement than she is (she is almost double his age) but he is trying to put up with her.  Then her recent lover (to replace Jamie while he was a captive of the Starks) and first cousin, Lancell Lanister comes up to her and tells her how he has found the seven Gods and to show penance for what they have done (cousins sleeping together and plotting her husband Roberts' death) and the Gods will understand.  She is a total biatch to him too. 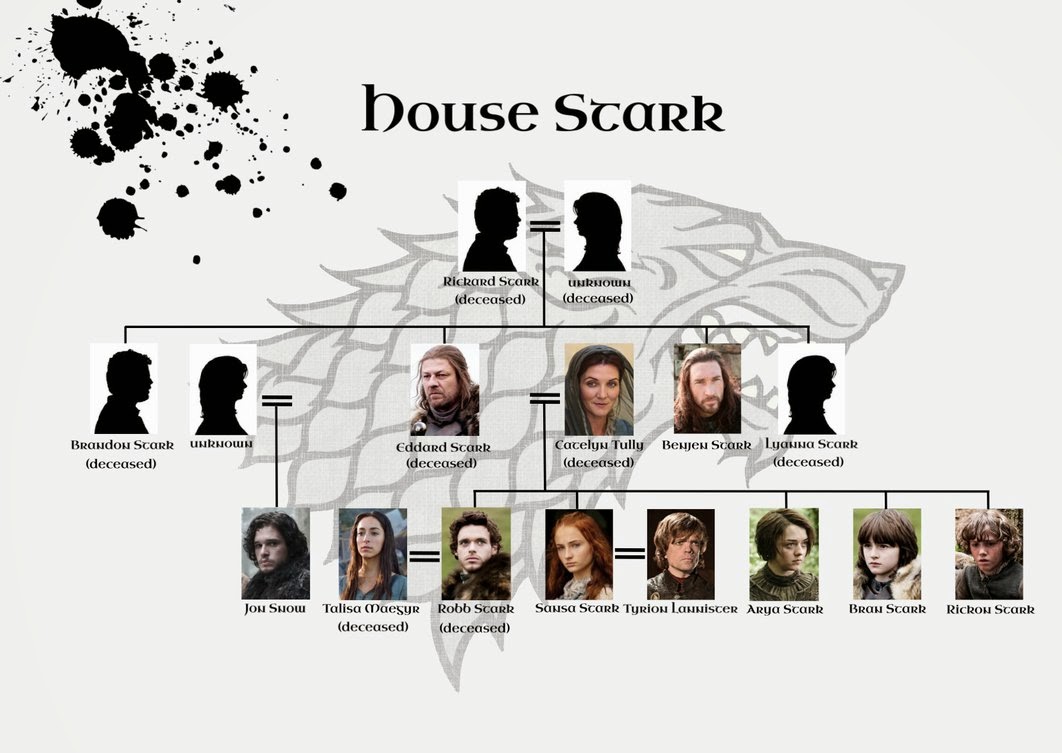 Jon Snow
Jon is at the wall.  Big shocker.  He is helping train some of he young soldiers in sword fighting when the Red Priestess Melisandre comes to him and has him go to the top of the wall to see Stanis Baretheon.  Stanis tells Jon that Jon needs to convince Mance Rayder (the captured leader of the wildlings) to bend the knee and join Stanis in the war for the Iron Throne.  Jon goes to Mance and does try to convince him.  Mance refuses stating that he would rather die a free man than lose the respect of his fellow compatriots by caving to southerners.  I do not really blame him.  I would not want to kneel to Stanis either.  Besides, Stanis is a bit of an ass hat.  His wife is CRAY CRAY and his mistress, Melisandre, is creepy as hell.  Manse is then put to the death by being burned at the stake.  As a show of honor, in front of everyone-wildlings and all-Jon shoots Mance with an arrow so he will not lose honor why screaming while being burnt.  I believe this to be foreshadowing.  With all of the wildlings and the Knights Watch all looking to Jon with honor and respect, I believe when the time comes he will be the force that unites both groups to fight the White Walkers.

Sansa
Disclaimer: I think Sansa is a bit of a waste of oxygen.  That being said, I had hopes for her for the first time with the end of last season.  At the end of last season, Sansa lied for Petyr about the death of her aunt Liza.  There was a look she gave Littlefinger, Petyr Baelish that said she knows how to play this little game now.  She then dyed her hair and it seemed that  the old pushover Sansa was gone.  WATCHOUT here comes the new Sansa. That was all at the very end of last season.  This season she is now in the Vale with her cousin Robyn and her guardian of sorts Littlefinger.  Robyn is being trained in sword fighting and he is proving to be a total wimp (in the books he has always been sickly).  Not at all surprising there though.  From what we see it seems Sansa is well and truly under Petyr's finger.  This totally bums me out!   HAHAHAHA I was fooled.  She is still being manipulated by Petyr.  UGGGG I had such high hopes.  Alas, she is pretty lame.

Arya
Arya is nowhere in this episode at all.  I was bummed.  She is my favorite character.  In the show, she is a total badass.  In the books she is even better and she started this story at NINE years old.  At the end of the episode, there are previews of episodes to come.  One shows where she goes to Bravos to train.  YAYYYY!

Daenyres
Daenerys is busy in Meereen dealing with holding the city.  Nothing really new here.  She is learning that compromise is not a sign of weakness but of strength.

Brienne of Tarth
Brienne is still in the world heading....where again?  Who knows and cares at this time.  Podrick Payne, previous squire of Tyrion Lannister, is with her and they are looking for Sansa (sort of).  There is a scene where Sansa and Littlefinger are in a carriage that passes Brienne and Pod in the wild.

Gendry
He is still rowing to King's Landing.  (I assume). 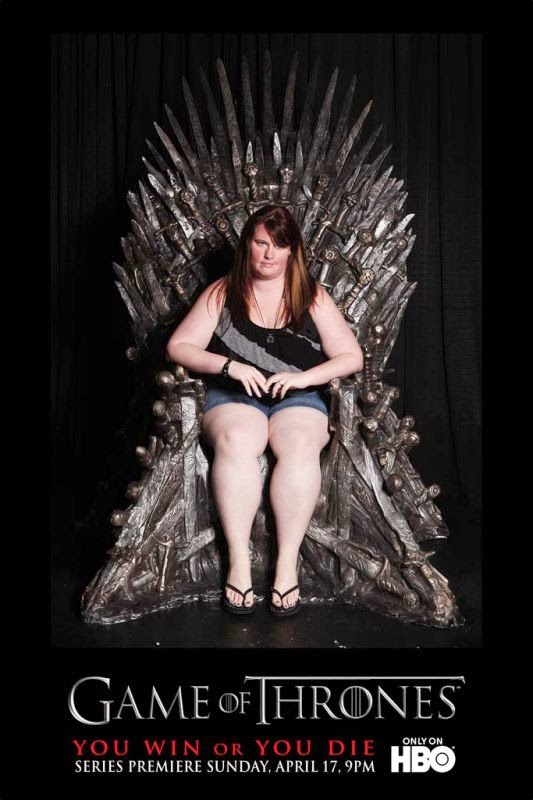 This is where we are now.  I love the books and the series is doing them so much justice.

Here is a very old pic of me trying to be Catelyn on the throne.  HAHAHA I had finished book 1 and was trying to show bitchy for the redemption of the death of Ned.


~I have many many friends and family that read/watched this series.  This is for all of them, they who have pushed and encouraged me to continue this wonderful journey.  This blog is dedicated to my friend Suzie who has had a really bad week.  I hope whatever happens, it happens soon and things get better.