After going on vacation I did not get to see the last three episodes on time.  During my time off, I thought I would try something a bit different.  I thought I would add more discussion rather than a just a recap.
In the last few episodes we have Daenerys messing up everything in Meereen.  Finally she made a few good yet somewhat questionable decisions.  She decided to allow the fighting to continue in the fighting pits...only with free men.  Then she decided to marry a citizen of Meereen.  LOLOL ok.  If she thinks that will work to help appease the people of this gawd awful town, then let her at it. 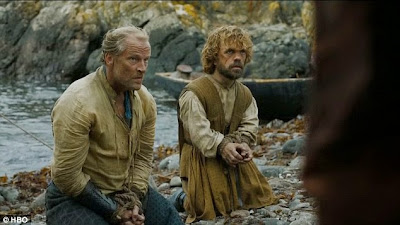 Jorah and Tyrion are traveling the long way to Meereen through old Valyria where they apparently put all of the people with grey scale.  Kind of like a leper colony.  Jorah contracts Grey Scale but hides it from Tyrion.  They are captured by slave traders who want to kill Tyrion for his penis.  Per legend, dwarf penis is lucky. This is hilarious to me.  The exchange the captors have with Tyrion while he tries to save his penis is beyond funny.   Tyrion states that they need to keep him alive to prove that the penis comes from a dwarf because he is well endowed.  LOLOL this is just great.  The captors decide to keep him alive.  Tyrion tells the captors of the combat prowess of Jorah and now they are both off to the fighting pits of Meereen.  I think the duo could be quite funny if the writers let them go at it, they would be even funnier. Even during stressful and dark scenes the banter of Tyrion can make anyone chuckle. Once in Meereen, Jorah and Tyrion come across Daenerys and Jorah tells her that he brought a present with him and Tyrion steps up and says, that he is the present.  Woo HOO, they have finally made it to Daenerys.  I do not know how this is going to play out.  I think that the combination of Tyrion and Daenerys has to be greatness because the Meereen story is past stale.  We need Tyrion to be back in a position where he can regularly use his gifts of tact and manipulation. 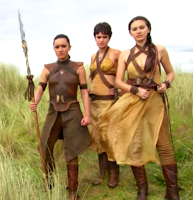 I do now know which duo I like better, Tyrion/Jorah or Jamie/Bronn.  Jamie and Bronn are off in Dorne looking for Jamie's daughter.  They are hilarious.  They walk right into the palace and try to take Myrcella.  She of course does not want to go and about that time, there are The Sand Snakes (the daughters of the dead Prince Oberyn Martell) and a battle takes place.  There is no winner because as the end comes so do the palace guards.  They take Bronn, Jamie and the Snakes into custody.  What is it with these Lannister men?  I love them both.  Both of them are witty and have moments of hilarity.  During the battle with the Snakes, Bronn was poisoned by one of the knives of the Sand Snakes.  Think of what took down the Mountain during the battle with Prince Oberyn.  The Mountain is still under the care of the new Maester in King's Landing and we do not know his status other than vegetable.  While in prison Bronn befriends one of the Sand Snakes she then gives him some of the anti-serum to save his life.  Interesting.  Thank goodness.  I thought they were killing off Bronn and I was about to be pissed off.  I love me some Bronn.

Cersei the bitch is at it again.  This time her sights are set at they Tyrell Family.  She has already had Loris taken into custody via the High Sparrow,  Now she has her eyes on Margaery,  RAH She has Margaery testify in regards to Loris not being a homosexual.  The next to testify is the Gigalo that Loris has been boffing. He testifies that not only did Margaery know, she caught him and Loris going at it once and made him leave.  Since the High Sparrow is a righteous man and Margaery lied, he takes her into custody.  Tommen is upset and trusts his mother to take care of it and get Margaery out of jail.  Tommen is showing his age in that he trusts his mother and does not see the wicked witch that she is.  The next episode lady Olenna tries to convince Cersei to release Margaery and Cersei will have nothing to do with it.  In fact Cersei goes to the prison to Margaery to gloat.

Lady Olenna has a meeting with the High Sparrow to try to save Margaery and of course it does nothing but to show that The High and Mighty asshat High Sparrow Is a total D-Bag.  The asshat Sparrow calls a meeting with Cersei and tells her all about Lancell and what secrets Lancell had to spill.  He then has Cersei thrown in a cell. WOOOOOOOOOOOOOOOOHOOOOOOOOOOO! Cersei thinks that she is going to be able to get out of this.  After all, her son is the King.  HA, you empowered the monster.  Now, they come after you.  YIPPEE!!!! This is the beginning of the downfall of Cersei Lannister I have been waiting for this for 5 seasons.  Down with the Bitch of Westeros! 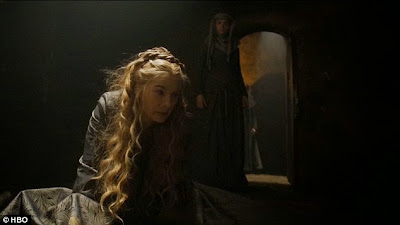 There are some bits with Jon Snow and the Knight's Watch.  He is going to free the wildlings and go north of the wall to recruit them to help in the upcoming war with the White Walkers.  He leaves the wall and it is right away that Sam and Gilly are accosted.  Maester Aemon dies and it if Jon does not get back soon the Watch will be no more and nothing but chaos.

Stanis and Mellisandre are marching on the Boltons and Winterfell but they are having a problem.  The snow is coming.  Their sell-swords are from the south and not used to these kind of winters and the cold.  They have abandoned Stanis.  Mellisandre states that they need royal blood.  It is at this time that she tells Stanis they have royal blood in Shereen.  He tries to tell her they could use leeches and she says NO!  Holy Shit Stanis, you can not possibly consider doing this.  NO WAY!  If you kill your own daughter you will loose the respect of everyone.  Is being King worth killing your daughter and loosing the respect of everyone?  Everyone in Westeros will hear the story and think you are CRAY CRAY for following this psycho God that made you kill your own daughter.  I hope to God that you get your head screwed on straight and do not do this.

There has not been a lot of Arya this season.  She is still in the house of Black and White.  She is learning to be No One and getting past who she was.  This is difficult for her.  She has been washing lots of corpses.  The most recent episode someone brings their very sick daughter in for help.  She tells them about the healing waters and the waters are actually poison.  This is a mercy killing and she then washes the little girls body.  This is when Jaqen H'ghar takes her to show her the basement and tells her she might not be able to be No One but she might be able to be someone else.  Yay, I am tired of watching her wash corpses.

Sansa is now married to Ramsay.  There has been a lot of hubub over what happens next.  While wholly unpleasant, for the time that this show was set in, it kind of makes sense and I am not really offended by it.  Besides, it is worse in the book.  It is their wedding night and Ramsay is ready for getting some nooky from his new wife.  He makes Reek stand in the room to watch as he forcibly takes Sansa from behind.  Not nice or kind in any way.  In my opinion, to get that bent out of shape s a bit ridiculous. I think Sansa being married to that tool sucks big time.  I really, really do.  I have never liked Sansa, I think she is a huge idiot but still no one should be treated this way, except maybe Cersei or Theon.  HAHAHA  Later on, Sansa shows her inner idiot again when she tells Theon that they are not alone.  She asks him to light the candle in the tower to signal Brienne for help.  DOH!  Now,  Sansa has been locked in her room all of the time and Ramsay comes to her every night for more nookie.  Not a pleasant existence at all.  I get what she was trying to do but shit, you have to test the waters before jumping in and breaking your neck.  Of course Reek runs to Ramsay and tells him all about Sansa and the plan for help.  Ramsay then tortures and flays the maid that told Sansa about Brienne.  Sansa, really, you do not trust the lackey traitor with your biggest ace up your sleeve on the first go around.  What an idiot?  REALLY!  What an idiot?  I thought she was getting better.  Every time I think that, she then does something really stupid again.  She needed to work on Reek before telling him your one secret.  With the previews for next week, she tries in on Reek again.  We shall see.
The most recent episode there was a lot of action.  Until that point this season has been moving the players to where they need to be on the chess board.  I am happy for all of the action.  Mostly I am happy that Tyrion made it to Meereen and he will be able to begin his journey advising Daenerys.