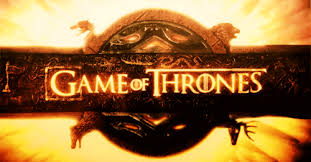 HOLY Crap that was a great episode.  I have to say this was the best episode so far this season.  WOWIE There is so much greatness.

Lets start with the bitch...Cersei.  YAY She is still in a cell and when one of her guards comes to bring her water.  Cersei curses the maid bringing it to her and tells her how she will kill her and other nonsense.  One time the guard/maid beats her with the water ladle.  The other time she spills the water on the floor and Cersei then tries to drink it off of the floor.  There is a look on her face like WTF.  This is great.  I hope there is the thought in her head of any of her actions that might have led up to her being in this situation.  She did say something to the effect that she put the Sparrow in place she is not going to bow to him.  I think she is thinking poor me these ingrates need to be punished.  I HIGHLY doubt that there is any thought of how she might have contributed to her circumstances..  YAY I am so happy that Cersei is in the shit.  No one deserves it more than she does.  I can not wait until it gets even worse.

ARYA YAYAYAYYAYAYAAYAYYY Arya is back.  Now we see a different phase of her training to be a Many Faced Man.  Her bit begins with her sitting with Jaqen and reciting a lie about her childhood.  When she makes a mistake Jaqen hits her on the back of the hand with a wooden dowel.  She then goes into Bravos as she tells the lie. We cut to her back with Jaqen and she is relaying her story of what happened in Bravos and understanding what she saw and heard.  WOO HOO!  WE NEED MORE ARYA!  I get that so far this season her story is a book behind. BUT GEEZE there could be more of her in each episode to catch us up.  I mean there are only two episodes left folks.  I think they will probably leave her story off where book four ends and ouch....people are gonna be pissed.

I have to interrupt with a personal bit here.  When I read book 1 and Ned lost his head I was PISSED.  I finished the book thinking that something would happen to the Lannisters to account for what they did to Ned.  Needless to say it did not come.  I refused to go forward in the books because I was so pissed off.  Occasionally I would check in with Wikipedia to see what was going on.  When I saw where Arya was heading, I was done.  I have not looked in years.  The show has been going on and I finally decided to sit down and watch it....read the books and get past Ned.  I still have not forgiven what happened to Ned.   I get the reason for the tragedy and I have moved past the murder of a truly exceptional character.  I do feel like I am betraying his memory by reading/watching on without him.  Oh well.

Ok Back to the show.
Daenerys
Tyrion and Jorah finally have made it to Meereen and the Mother of Dragons.  Daenerys asks Tyrion if he is there to serve her and he states not "serve" he is there to advise.  Tyrion talks of Varys and how he was probably helping her to escape Westeros as an infant.  Tyrion trusts Varys and so should Daenerys.  Ultimately, she decides not to kill Tyrion and frees Jorah.

Sansa
There is much here but we do have Reek tell her that he did not kill Bran and Rikon.  Yay for that at least.

The bulk of the episode was spent north of the wall.  This is where all of the awesomeness happens.  Jon is off to talk to the wildlings.  He and Tormond (his wildling partner) try to convince the wildlings to join in the fight.  One of the wildlings tells them to basically go to hell and Tormond beats the shit out of him....WOO HOO.  Both Tormond and Jon talk to the elders of the various clans and try to convince them to join forces and go south of the wall.  Jon shows the DragonGlass.  Some were on board and some were not.  Those who want to go south and realize they are toast if they wait are starting to get on boats and head out.  You hear a thunderous cloud roll in and it turns out that it is the undead coming down from the mountain.  WOW there were a zillion of them.  The free folk and The Knight's Watch that accompanied Jon fought them valiantly.  Cut cut the to the top of the mountain an there is the King of the White Walkers.  He sure did look creepy and cool.  This scene had a ginormous giant and lots of really cool corpses doing battle.  Honestly there have not been that many scenes with the dead and these were so cool.  If the Walking Dead were not over, I think they should take a look at these zombies because they were hella creepy.  After much death and battle with the remaining free folk and Watch Jon and a few remainders get in a boat and head out to sea.   The king of the walkers comes down off of the mountain and slowly raises his arms and all of the dead rise and look out at the ocean and the ships.  That is how the episode ends, with all of the people that did not make it to the ships arisen and now looking out at the survivors of battle.
There are tens of thousands of corpses looking out of that bay to the ships in the harbor.  WOW This was sooooooo cool.  Creepy but cool.  WOW. I mean WOW.  There was so much going on in this episode.  What am I not excited for?  LOL I am already nervous that there are only two episodes left. 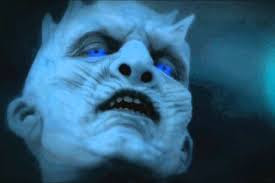