Urban dictionary has jumping the shark defined as:

When your favorite show starts to flag and go downhill, as when Fonzie jumped the shark on water skis. We all knew that Happy Days was on its way down then.
When Rudy (Cosby show) hit puberty, and they added that new little girl that was Denise's step-daughter, that show DEFINITELY jumped the shark.
Unfortunately this has happened to one of my favorite shows. Lost Girl. This is a Canadian show that is in the fifth season and is available for watching on SyFy.    The story is about a community of Fey in all of their variations.   In this world, Fey not only exist but thrive.  All of the Fey are born with special characteristics.  For example Bo is a Succubus, Dyson is a Changer and Hale is a Siren.  The end of season 4 brought the death of a popular character and Bo's sidekick, Kenzie.  Kenzie was a the lone human in this non human world.  Since Kenzie was so popular, I knew this could not be the end of her story.

The beginning of this season was all about saving Kenzie from the grips of the Valkyrie in Valhalla.   Once she was rescued, she then left the show.  WTH?!?!?!?  Kenzie was the lone light in this dark world.  With Kenzie gone, there is no joy and no humor.  Since there is no comedic element in the show without her, they introduced someone new. 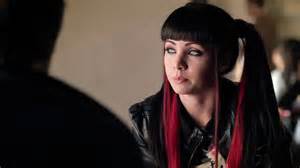 The powers have be decided to introduce Mark, a previously unknown offspring of Dyson.  Mark is a dick.  He is not funny, he is selfish, arrogant and treats people poorly.  How is he supposed to replace Kenzie?  Why are you now in the middle of season 5-the last season-adding a new main-ish character?  I think the show could have taken a more dramatic tone to the season and left this douche out.  Yes, Kenzie would be missed but damn they messed up with Mark.  Seriously this is about as bad as cousin Oliver on the Brady Bunch.  Why'd you do it?  Why'd you do it?  I love this show and now with all of the douchiness it is almost hard to watch.  Please get rid of this character and bring back Kenzie!