HOLY BANANAS this is the 30 year anniversary of one of my favorite movies of all time.  The Goonies.  Where did the time go?  Holy shit, did I get old??  What happened to when I was this age?  Back in the day I LOVED the Goonies.  Hell, I still do.  This was the first movie I saw in the theater that really changed my life.  I was introduced to the word shit by people in my age range and to this day it is a staple in my vocabulary.  This movie truly changed my life at that time and helped make me who I am today. 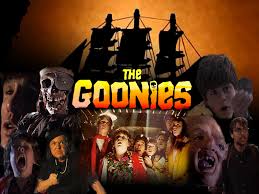 Mouth was my first movie crush.  I was in love.  I wanted to marry him and have his babies.  Mouth was cute and snarky.  The entire cast was perfect.  Everyone involved with this movie was perfect.  I love every one. Other than Mouth, my favorite Goonie was Chunk.   He was the nerdy kid.  In my group I was the chubby and nerdy kid.  I could relate to these characters,  They grew up without a lot of money and their houses were about to be foreclosed upon.  While my family was not in that dire circumstance, I could relate.  I knew what it felt like to be a kid and to have the desire to make a difference, to go on an adventure and to accomplish something.  To this day, I know all of the lines and scenes.  Hell, who does not know about the truffle shuffle?  It is a commonly known thing.  WOO HOO Chunk. 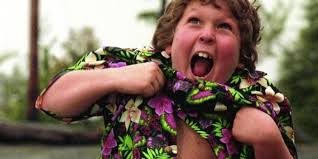 The Goonies was the first movie I saw with kids that was not some Disney goody-two-shoes movie.  There was swearing, kissing and stress.  This was an adventure movie that was entirely kid based.  The adults were minimal and therefore no bossing kids around.  This was liberation, freedom from the restraints of childhood.  The hope that maybe we can make a difference, no matter how old we were.

The total awesomeness of this movie is too great to mention everything.  While timeless, it is the quintessential 80's you can do it movie.
God, I love The Goonies. 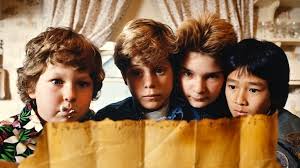