HOLY COW!!! There is so much to tell and I hope I can remember it all.  First my Sexy Sandwich.  So there has been a change in the general location of Froggy's.  It is still in the basement of the Marriott but in a different room with a bit of a different set up.  I get to the room that they are queueing up the lines for the photos.  It is very hot down there and there are a zillion people.  My op time was 2:15.  They did not call people for my pic/time for awhile and 2:15 came and went.  They did announce that Stephen's plane was late so he was going to be a little delayed.  After awhile they called us to get in line.  Off we went to a smaller room.
YAY.  Once in the room John Barrowman got up on a table and told us that Stephen was on his way. He was up on that table for probably 10 minutes or so just entertaining us.  WOW.  What a cool guy.  My parents used to talk about entertainers and how my generation is missing them.  Think Lucille Ball, Bob Hope, and Johnny Carson.  For the first time in my life, I have had an encounter with a true entertainer.  John Barrowman, wow, you are amazing.  He did not have to do that for us.  He could have gone back to his room, sat in a corner reading a book, anything, but no, he entertained us.  A true Treat.
Once Stephen gets there, they file us in.  I was the third in line and wowie.  He is BUFF and all muscle.  Cool Guy too.  Friendly and kind.  I was so lucky to have met them both. 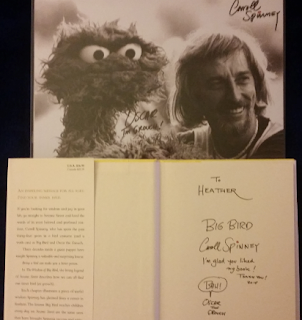 Next on Friday was my ultimate fan-girl moment.  I have never really had one.  I get pathetically shy when I meet celebrities so I usually just turn red and put my head down.  No fan girl here.  That was until I met Caroll Spinney.  Caroll Spinney has played Big Bird and Oscharsince the characters inception.  He has been with Sesame Street since the 70's.  He is now in his 80's and still plays this character.  WOW.  I went to his table to have my books signed and while in line I was trying to not get fan-girl.  I failed MISERABLY.  I get up there and I start to cry.  He and his wife are the most awesome people.  They were snuggling at the table and I could not even speak.  While he was signing, his wife, Debbie, asked me questions and all I could do was nod and cry.  Totally embarrassing, genuine, but embarrassing.  I was pretty much a mess the rest of the day.  I went to several panels and late night stuff.  FUN FUN FUN.

Saturday and or, was it Sunday?
I went to the Carroll Spinney panel on Saturday and I cried through the whole thing again.  At least I am not the only one there in tears.    The rest of the day was spent panels.  I loved a lot of them and then there were a few I was confused on.  I went to a panel on mature themes in genre tv and it became a rant on the whole incident with Sansa and Ramsey.  Like 3/4 of the panel was about this.  Kind of annoying.  The track director spoke up from the back of the room and told the panelists to get off of Game of thrones.  THANKS!  I went to one on Dark Matter and there was so much giddiness over the whole thing it was great.  Some time on Saturday, things started getting jumbled and I do not really remember what happened on Saturday vs Sunday.  I do know Saturday night was the Voltaire concert.  It was as wonderful as always.  I love going to the concert and dancing with everyone.  I do not get the people who sit in the back of the room not bopping along, not singing and just looking bored.  There were lots of panels both days some good some not so much.  They all kind of bled into one another.  I really liked the LotR panels with Constance J Wagner.  She is awesome.  Saturday night was the annual Match Game in the 25th Century with Gil Gerard.  The guest panelists this year included Sylvester McCoy, Trenna Keating Garrett Wang and John Barrowman.  The guests are not generally announced until the game starts but apparently Gil tweeted out who they were going to be. The guests were amazing and I had a great time.

Monday
Monday was so weird.  Normally this is the day that people go home.  I get it.  This year it seemed almost abandoned.  There were so few people left.  Also, there seemed to be ALOT less programming Monday.  What happened?  Is it because so many of the track directors and staff want to go to the Dead Dog Party?  I do not get it.  I thought the con was supposed to be four days.  Instead it is more like 3 and a quarter.  I hope we get more programming on Monday next year.

All in all this was a wonderful time and I am already prepping for next year.  Thank you again to all of the volunteers that put the show together.